The prestigious prize "Enrico Fermi" has been awarded starting from 2001, to commemorate the great scientist on the occasion of the centenary of his birth. The prize is yearly awarded to one or more Members of the Society who particularly honoured physics with their discoveries. A commission made of experts appointed by SIF, CNR, INAF, INFN, INGV and INRIM and chaired by the SIF President selects the winner/s among a list of candidates and sends the proposal to the Council of SIF for final approval.

Each Member can make motivated nominations addressing them to the President of the Italian Physical Society. Every nomination, complete with the required documents, has to be submitted through electronic mail, filling the application form that will be available from this page.

The prize for the Year 2022 will be conferred during the Opening Ceremony of the 108th National Congress of the Italian Physical Society that will be held in Milan, 12 September. 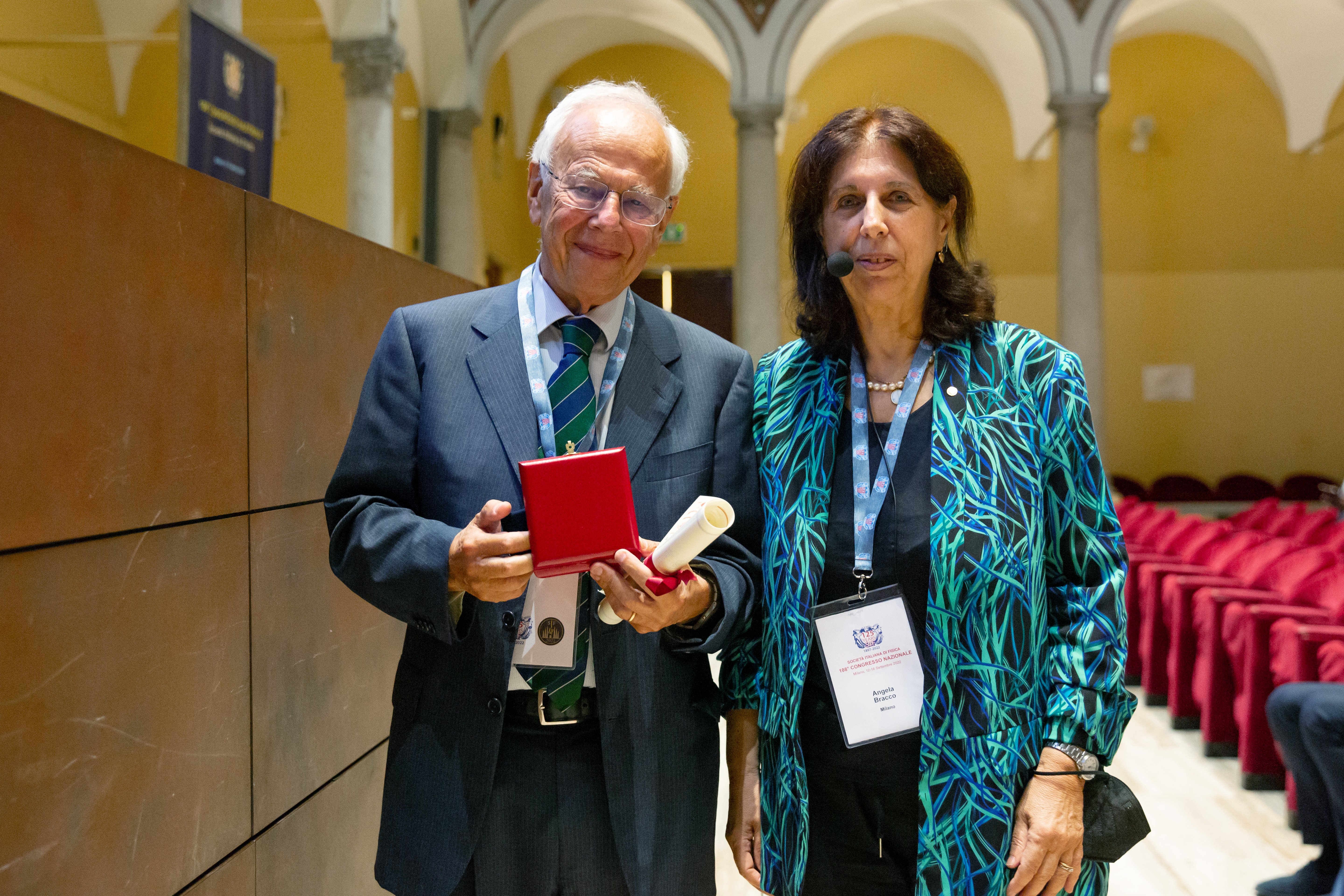 Citation
– for pioneering experimental (JPT) and theoretical (GB) studies of the atomic-scale dynamics at solid surfaces through the development of high-resolution helium-atom scattering spectroscopy.

Citation
– for their remarkable contributions to the study of the Universe with different observables and techniques.

Citation
- to Sandro De Silvestri, for his activity on the generation of light pulses with a reduced optical cycle duration and for applications to spectroscopy of matter and nonlinear optics in extreme conditions;
– to Patrizia Tavella and Giovanni Mana for their original and important contributions to the measurement of time and to the definition of mass.

And in particular:
– to Patrizia Tavella, for having developed methods and techniques for defining the time scale and its implementation in the Galileo European navigation system;
– to Giovanni Mana, for having given a unique contribution to the redefinition of the international system of units of measurement, in particular through the definition of the Avogadro constant and the Planck constant. Citation
for their outstanding contributions in the experimental evidence of CP symmetry violation in the beauty and charm sectors at e+e– and pp colliders, respectively.

In particular:
– to Marcello Giorgi, for his leading role in experimental high-energy particle physics with particular regard to the BaBar experiment and the discovery of CP symmetry violation in the B meson systems with beauty quarks;
– to Tatsuya Nakada, for the conception and crucial leading role in the realization of the LHCb experiment that led this year to the discovery of the CP violation in D mesons with charm quarks.

In particular:
– to Federico Capasso, for seminal contributions to the physics of electronic and optical materials and their applications, ranging from the invention of the quantum cascade laser to the design of novel semiconductor materials, including metasurfaces;
– to Lev P. Pitaevskii, for his longstanding contribution to theoretical physics, including the study of superfluidity in liquid helium and of Van der Waals-Casimir forces, as well as for the development of the Gross-Pitaevskii theory which is a fundamental block of the physics of quantum gases;
– to Erio Tosatti, for fundamental theoretical contributions aimed to understand the optical properties of solids, in particular of surface and transport phenomena, even in extreme conditions of dimensional confinement, high temperature and pressure.

Citation
for their outstanding contributions to neutrino physics and astrophysics

In particular:
– to Gianpaolo Bellini, for the measurement of the solar neutrino spectrum, providing the evidence for nuclear hydrogen fusion in the Sun and for adiabatic neutrino flavour conversion in matter;
– to Veniamin Berezinsky, for his theoretical contributions to the cosmogenic production of ultra-high energy neutrinos, to high energy neutrino astronomy and to the solar neutrino problem;
– to Till Arnulf Kirsten, for the first observation of low energy solar electron neutrinos providing the first direct evidence of hydrogen fusion inside a star. In particular:
– a Barry Barish, for his fundamental contributions to the formation of the scientific collaborations LIGO and LIGO-Virgo and for his role in addressing various technological and scientific challenges whose solution led to the first detection of gravitational waves;
– a Adalberto Giazotto, for his decisive contributions in conceiving and realising the first interferometer with super-attenuators, Virgo, which made possible the quest for gravitational wave sources with an unprecedented sensitivity at low frequency Citation
for their innovative and high-impact contributions to the study of phenomena dealing with the interaction of light with matter and particles.

In particular:
– to Toshiki Tajima, for the invention of the laser-wakefield-acceleration technique which led to a large number of fundamental and interdisciplinary applications ranging from accelerator science to plasma physics and astrophysics;
– to Diederik S. Wiersma, for the first observation of Anderson localisation and of anomalous transport phenomena described by Lévy statistics in the framework of his highly original research on light propagation in disordered media.

Citation
For the invention of the MOS silicon gate technology that led him to the realization in 1971 of the first modern microprocessor.

Citation
for the outstanding results that the five large international collaboration experiments at the CERN LHC collider – LHCb, TOTEM, ATLAS, ALICE, CMS – have achieved during the first period of LHC data taking under the successful guidance of the awardees as spokespersons.

Citation
For the discovery of a Molecular Dynamics method known the world over as the Car-Parrinello method. This method has been a breakthrough in the field of numerical simulations, with great impact in many interdisciplinary contexts both theoretical and experimental, ranging from Material Science to Chemistry and Biology

Citation
For their fundamental contribution to the discovery of the weak neutral currents with the Gargamelle bubble chamber at CERN. Citation (Astrophysics)
For the discovery of the X-ray afterglow of Gamma-Ray Burst with the BeppoSAX satellite.

Citation (Nuclear Physics)
For his contribution to the theory of atomic nuclei and, in particular, for the discovery of a rich variety of dynamical symmetries and supersymmetries.

Citations
For the relevance of their theoretical results in the study of global and local symmetries in field and strings theories. To Dimitri Nanopoulos for the discovery of fundamental phenomenological properties of grand unification and superstring theories. To Miguel Angel Virasoro for the discovery of an infinite-dimensional algebra of primary importance for the costruction of string theories.

Citations
For their fundamental theoretical results in the field of complex systems. To Giulio Casati for his understanding of the relationship between classical and quantum chaos also in relation to quantum computing. To Luigi Lugiato for the discovery of instability-driven structures in non linear light-matter interactions. To Luciano Pietronero for demonstrating the onset of fractal shapes in a variety of self-organizing phenomena.

Citations
For their fundamental experimental results in the field of weak interactions. To Milla Baldo Ceolin for her outstanding works on K-meson and neutrino physics. To Ettore Fiorini for his contribution to the discovery of weak neutral currents and to the study of solar neutrinos. To Italo Mannelli for the demonstration of direct CP symmetry breaking in the K-meson decay.

Citations
For their pioneering contributions to the knowledge of coherence phenomena in matter and radiation. To Giorgio Careri for the discovery of quantum vortices in superfluid helium. To Fortunato Tito Arecchi for the first experimental demonstration of the statistical properties of coherent radiation. Citations
For their discoveries that significantly contributed to the development of modern theories of Gravity. To Sergio Ferrara for his contribution to the discovery of the theory of Supergravity. To Gabriele Veneziano for his discovery of Dual Models, subsequently acknowledged as the theoretical basis for a string theory of Quantum Gravity. To Bruno Zumino for his contributions to Supersimmetry and Supergravity theories. Citations
For their fundamental contributions to the theory of weak interactions. To Nicola Cabibbo for his theory of down- and strange-quark mixing in weak decays, in which the well-known parameter called "Cabibbo angle" plays a key role. To Raffaele Raoul Gatto for his pioneering works in the field of strange-particle weak decays and for his role of leader in this fundamental field of subnuclear physics. To Luciano Maiani for having introduced, together with S. Glashow and J. Iliopoulos, the so-called GIM mechanism which, predicting the existence of the fourth quark, allowed to solve the problem of flavour-changing neutral currents.

Citation
For his contributions to field theory and statistical mechanics, and in particular for his fundamental results concerning the statistical properties of disordered systems.