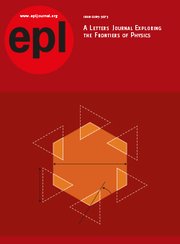 Nominations for Editor in Chief of EPL

Nominations are now open for the Editor-in-Chief of EPL, a leading global letters journal owned and published by a consortium of 17 national physical societies in Europe. The Editor-in-Chief (EiC) needs to be a recognized authority and leading researcher in a field of physics, and have a broad knowledge and interest in physics and its frontiers. The EiC will need to demonstrate strong commitment and leadership to further develop EPL as a top-ranking journal. Experience with the editorial process for a physics journal is also desirable. The EiC is central to enhancing EPL’s position as a leading global physics letters journal. The term of office of EPL Editor-in-Chief is three and a half years beginning in July 2017. A job description is available at http://www.epletters.net.
Nominations must include a CV, publication list, and a brief covering letter describing the qualifications and the interest of the individual in the position of EPL Editor-in-Chief. Nominations should be sent to the EPL Editorial Office no later than 15 January 2017 (editorial.office@epletters.net).
Further information can be obtained from the Editorial Office in Mulhouse.

EPL has joined the world of Twitter. This new account gives an excellent opportunity to increase engagement with authors and visibility of EPL content within the physics community.
EPL can be followed on Twitter at @epl_journal

Owned by a partnership of 17 European physical societies, EPL is published under the scientific responsibility of the European Physical Society by EDP Sciences, IOP Publishing and Società Italiana di Fisica. We have brought together our expertise to create a high-quality journal for the international scientific community.

Exploring the frontiers of physics

Our vision is for EPL to become a leading home for global physics letters, to offer rapid publication of ground-breaking physics results from the international community, and to provide the broadest coverage of physics research.