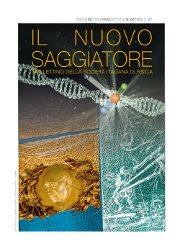 It is distributed free of charge to members in good standing of the Italian Physical Society.

Il Nuovo Saggiatore carries out the functions of a popular scientific magazine as well as a bulletin of the Italian Physical Society. The latter, founded in 1956 as a newsletter for members, has maintained the same role for almost thirty years and the rather limited function of taking an interest in the internal life of Society.

In 1985 it was completely renovated to take into account wider requirements and took on the name "Il Nuovo Saggiatore".

It is divided into several sections:

In evidenza, devoted to important anniversaries in the physics world.

Scienza in primo piano, publishes mainly in Italian the most recent information on the results obtained in Italian and foreign universities and laboratories.

Fisica in erba (edited by R. Nania), dealing with physics and young people for outreach initiatives, both at the national and international level.

Percorsi, dedicated to the history of facts or persons who had a different role in the SIF or in the physics community.

Il nostro mondo, dedicated primarily to reports of the Society and facts and interesting news for members.

News, events and facts related to the world of physics and science in general.

Interviste, brief meetings with physicists or important persons in the world of physics, in the form of interviews conducted by colleagues.

In ricordo di, obituaries of lost colleagues, either sent spontaneously or directly requested by the Editorial Board. Obituaries, complete with photos, are published in full only online, and they are reported in short form in the immediately following printed edition.

Recensioni, publishes comments on interesting popular books and recent texts in the field of physics. From 2012 the reviews are published in full only online and listed in short form in the immediately following printed edition.

Opinioni, publishes, at the discretion of the Editorial Board, letters or comments sent to the director with possible response. To ensure timely disclosure, they are immediately published in the section Opinioni and remain in the online version until the publication of the next printed edition in which they are published in full.

The invited articles must be prepared by following the instructions in the authors' guide and sent by e-mail directly to the editorial office at the following e-mail address: saggiatore@sif.it.